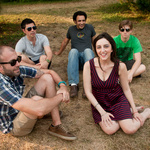 "Karate Coyote", which was produced by Jerry DePizzo (O.A.R.) and Mike Landolt (Maroon 5, Songs About Jane) captures the band at a heightened level of maturity, but sticking to its ever-poppy guns. The boy/girl vocal interplay is as inviting as ever. The twisting time-signatures and tapping guitars subtly make their presence felt under layers of catchy synthesizers and melodies. Older, wiser, and sexier than ever, Karate Coyote is back on the market and looking for that special one.

In early 2009 Karate Coyote led a charge to re-establish indie-rock music in Central Ohio. The mission was successful and the band found its single "So Far, So Good" in the top requested songs on CD102.5 FM (a first for a local artist). The single eventually took its place as #17 on the top 101 songs of 2009 alongside bands like MGMT, Spoon and left an everlasting imprint on Central Ohio's famous "shoe-gaze" music scene.

The band mastered its live show opening for Matt and Kim, Spoon and Rogue Wave. The second place finish in 2010's "Scott Pilgrim vs The World" national music video contest had professionals contacting KC from Chicago to New York.