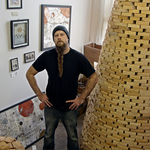 As an only child, growing up in a small western Pennsylvania town was an amazing beginning to my art career. The freedom to roam, explore and create anything my mind could conjure, set the precedence for who I am and what my work has become. My youth was filled with building earthen forts, rock hunting, building small dams in the local creeks, and so much more.

Throughout my teens and college years, I began to focus on my career as an artist and while I still felt invigorated by nature, I had longed for the city. After graduating from college, I made my move directly to Columbus, Ohio. The perfect choice to have a symbiotic blend of both a big city and country mentality. This meld of culture and geography has allowed me to not only create work in my studio, but also venture off into the wooded areas of Columbus to pursue my passion for large scale earthworks.

Now approaching 40, and having spent an equal amount of time in both an urban and rural environment, my ideas and concepts are beginning to merge into both environments. This latest installation is a combination of forms from my previous earthworks, but built from the remains of the urban environment.

As this concept evolves, I hope to be able to engage both the inner city gallery environment and the open wilderness with materials that are both natural and manufactured, to create thought provoking and visually stimulating work that I refer to as “Urban Works.”