MISSION
Hixon Dance inspires audiences, empowers communities through movement, and elevates the field of dance in Columbus, Ohio.
VISION
Hixon Dance creates evocative works of modern dance for stage and film. We offer classes for the community to engage them in the act of creating, and collaborate with other artists and mediums in the generation of new work. Our goals include:
HISTORY
Hixon Dance is a modern dance performing ensemble founded in 2007 and based in central Ohio. The company has been active in the performing arts through concerts, showcases, collaborations, festivals, and educational events. More recent collaborations have taken the company to Washington, DC among other areas.
Hixon Dance has been a mainstay of the independent dance community, participating in a wide array of community-centered performances. The company was chosen several times by adjudication to present work in the Columbus Movement Movement (cm2) showcase series Columbus Dances between 2007-2010. Hixon Dance was a finalist in the Greater Columbus Arts Council’s New Choreography Project in 2008. They were invited to perform several times at the Columbus Summer Dance Festival hosted by The Ohio State University. They have performed at The OhioDance Festival, and in 2016 they presented an original work for a 4’x4’ stage in Ten Tiny Dances at the Short North Stage.
Hixon Dance regularly collaborates with other artists—especially musicians—and experts in other fields to inspire, create, and produce new work. The company is known for presenting impactful and finely crafted works with a strong commitment to developing polished theatrical productions. In 2008 they collaborated with shove gently dance to present an evening of original works. Two years of major collaborative work began in 2008 with local composers and musicians to create Airs and Dances and Airs and Dances II. For each of these programs, several pieces of new music were commissioned and more than 10 musicians performed live alongside the dancers. Hixon Dance were guest performers for Groundshare Arts Alliance, presenting work in Last Light—a multi-generational dance and theater production. In 2015, Hixon Dance artistic director Sarah Hixon and veteran performer and astrophysicist Gregory Mack collaborated with the artistic director of Groundshare Arts Alliance, Amanda Layton-Whiteman, to create and perform a site-specific work commissioned by the National Academy of Sciences. Most recently the company collaborated with Opera Project Columbus for Amahl and the Night Visitors.
Education and outreach are a central component of the company’s mission.They have been artist-in-residence for many local dance studios, theaters, and college programs. The company is a regular feature of different educational programs for the Wexner Center for the Arts including Think Tank: Connecting Educators, the Arts, & the Classroom and Art on the Brain. Ms. Hixon has given master classes for the OhioDance Festival including a Hixon Dance Repertory class. She has also taught or created work for Wittenberg University, the Worthingway Arts Program, Upper Arlington City Schools, CATCOisKids, and others.
Hixon Dance has received funding through the Franklin County Neighborhood Arts Grant, the GCAC Project Support Grant, the Columbus Foundation, and through other grants and individual donors. They have been featured on LifeLine Columbus, and were considered “highlights of the dance season” on several occasions by Jay Weitz of the Columbus Alive! 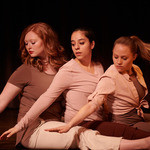